A recent Pulse Asia Survey showed an overwhelming preference for children’s participation in face-to-face classes in the coming school year, a similar call that Senator Win Gatchalian has made over the past months. 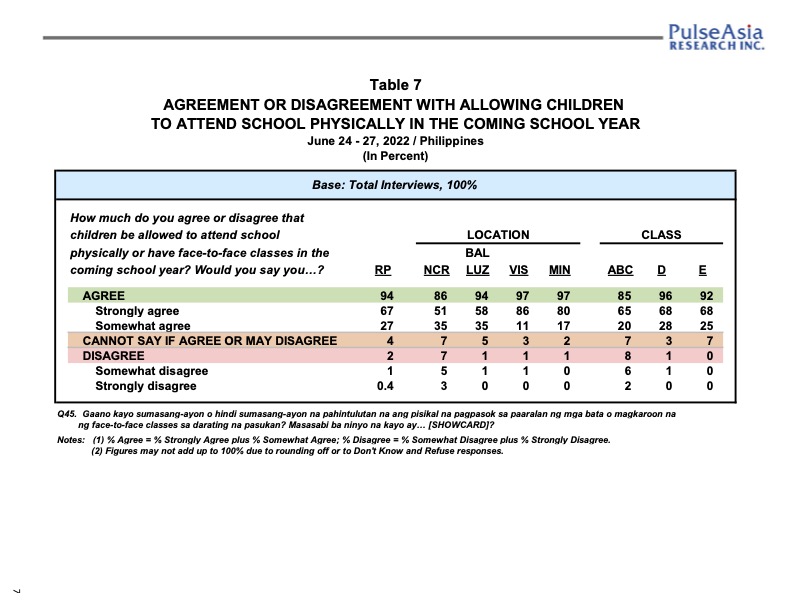 For the chairman of the Senate Committee on Basic Education, Arts and Culture, this sends a signal to the government that the resumption of face-to-face classes should no longer be delayed after more than two years of grappling with the COVID-19 pandemic, noting that the prolonged lack of face-to-face classes will only lead to deeper economic scars due to the alarming learning loss.

Based on the survey commissioned by Gatchalian and conducted on June 24-27, 94% of adult respondents agree that children should be allowed to attend face-to-face classes. Four percent cannot say if they agree or may disagree and only two percent say they disagree. The overwhelmingly favorable attitude towards the resumption of face-to-face classes is resounding across Classes ABC (85%), D (96%), and E (92%).

The survey results showed a stark contrast with a similar survey conducted in June 2021, where only 44% of respondents agreed on resuming face-to-face classes, while 33% said they cannot say if they agree or they may disagree, and 23% disagreed. Results of this survey showed that the demand for face-to-face classes is stronger among Classes D (44%) and E (49%) compared to Classes ABC (32%).

The Department of Education (DepEd) has recently ordered all public and private basic education institutions in the country to shift to face-to-face classes by November 2.

To ensure the safety of learners who are going back to school, Gatchalian maintained the need to ramp up pediatric vaccination against COVID-19, where the DepEd should proactively facilitate the operation of a more aggressive school-based vaccination program in coordination with the Department of Health (DOH). The lawmaker flagged that vaccination coverage among children 5-11 remains low. As of July 7, only 3.6 million or 26% of the target 14 million children aged 5 to 11 are fully vaccinated. For minors aged 12-17, however, 9.6 million or 86% of the target 11.4 million are already fully vaccinated.

According to the National Economic and Development Authority (NEDA), a year of school closures costs about P10.8 trillion in future productivity and wage losses over the next 40 years – an economic cost that does not yet even capture how every school that is closed exacerbates the already existing inequalities in education suffered by the poor, those from the rural areas, those with disabilities, and the girls.