Win Gatchalian
Gatchalian updates 900 recipients about status of their scholarship 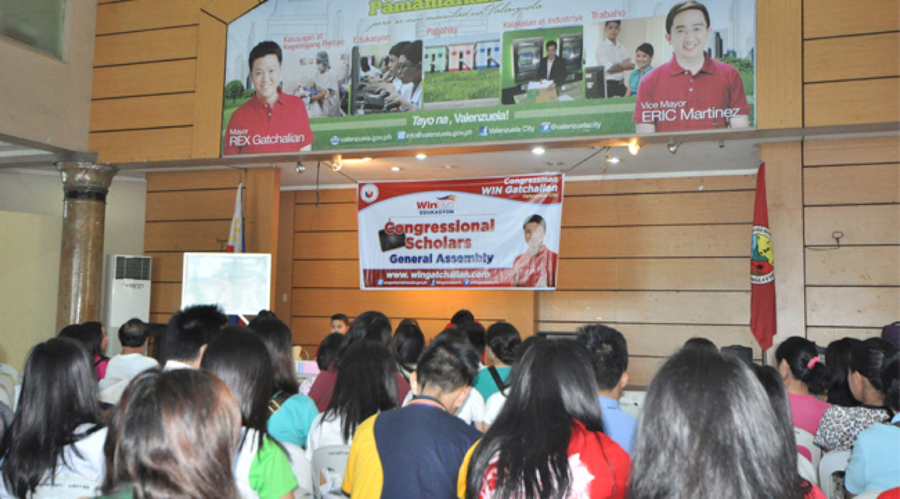 About 900 scholars living in the first district of Valenzuela City were given the chance to update the status of their scholarships during the first Congressional Scholars Meeting that was held at the Valenzuela City Convention Center last week.

The two-day general assembly also provided a venue, wherein beneficiaries of various scholarship programs of Valenzuela City Congressman Win Gatchalian can interact with each other.
Aside from electing a new set of officers in the school-based chapters of Gatchalian’s volunteer group Win Youth Club, the scholars also discussed the gift-giving program of the local government of Valenzuela City this coming December.
The participants were students enrolled in 33 different colleges in Metro Manila, including the University of the Philippines (UP), Polytechnic University of the Philippines (PUP), Pamantasan ng Lungsod ng Valenzuela (PLV), University of Sto. Tomas (UST), and University of the East (UE).
During the meeting, new recipients of scholarship were welcomed in the Win Youth Club after they signed an agreement that they will render community service to Valenzuela City and take part in its different social projects.
The office of Gatchalian also encouraged the scholars to pay the state’s investment to their studies by helping another family member or relative to pursue a higher degree education after they graduated and when they found work.
Gatchalian founded the Win Youth Club to provide an enabling environment for scholars and active youth to explore their inner energies and talents to drive change in their communities.
During his term as mayor of Valenzuela City, Gatchalian supported 532 students with each given a P20,000 to P30,000 cash support every school year under the Dr. Pio Valenzuela Scholarship program.
As of September, Gatchalian has been financially assisting 1,250 college scholars through the Student Financial Assistance Program (StuFap) of the first congressional district of Valenzuela City. (Fatima De Guzman)