Win Gatchalian
Poll results: 6 out of 10 in favor of mandatory ROTC in senior high school

Senator Win Gatchalian points to popular support nationwide on the proposed implementation of the Reserve Officers’ Training Corps (ROTC) Program in senior high school, citing the results of the latest Pulse Asia survey that 69% of Filipinos agree to the proposal. 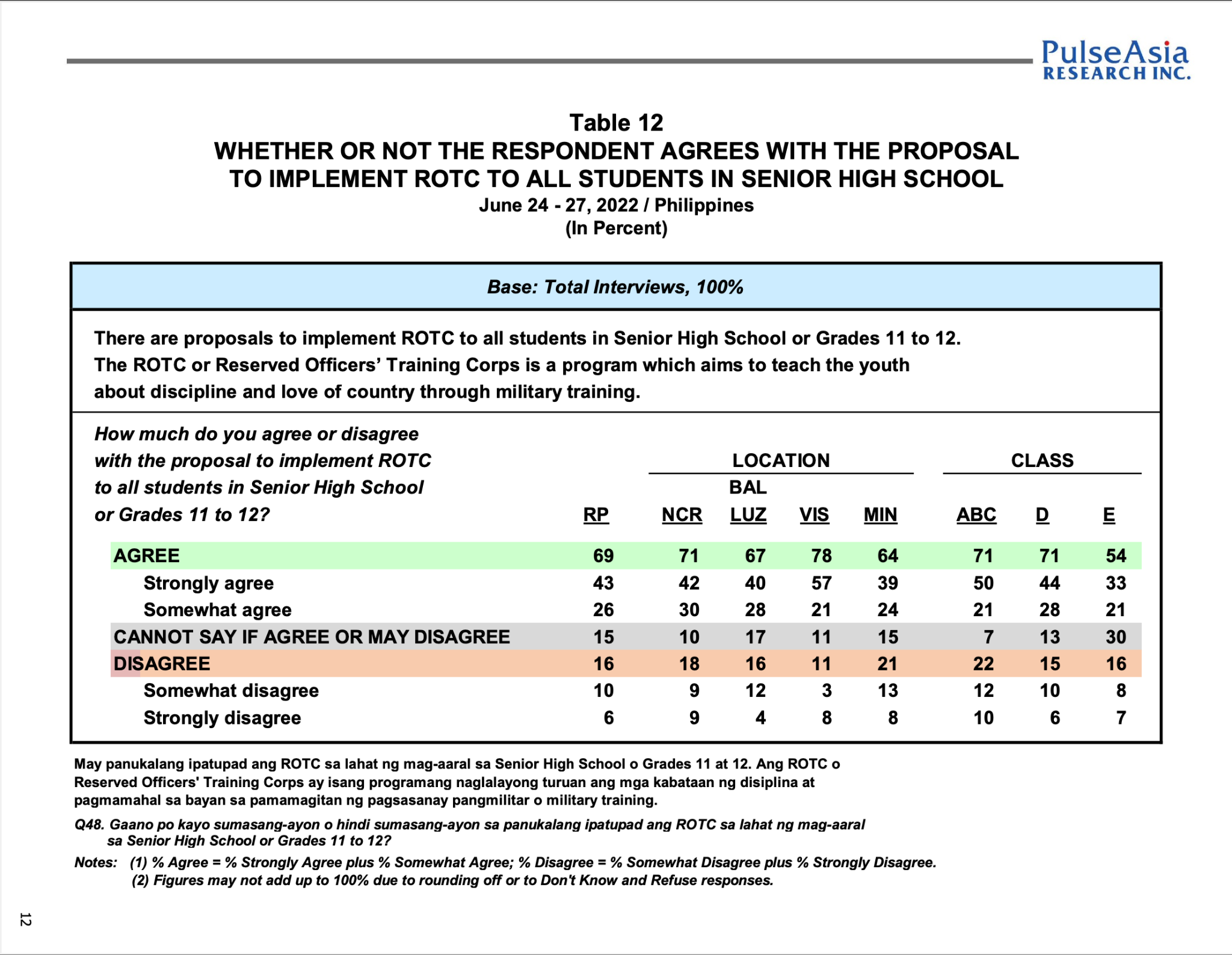 More than 70% of respondents in the National Capital Region (71%) and the Visayas (78%) support mandatory ROTC in senior high school while more than 60% in Balance Luzon (67%) and Mindanao (64%) also say they support the proposal. Among socioeconomic groups, support for mandatory ROTC is stronger in Classes ABC (71%) and D (71%) compared to Class E (54%). The survey, which Gatchalian commissioned, had 1,200 respondents.

In his SONA, President Marcos included the ROTC Program in his 19-point priority agenda. This is also one of Gatchalian’s priority measures for the 19th Congress. His Senate Bill No. 387 seeks the institutionalization and administration of the Basic ROTC program for students enrolled in Grades 11 and 12. The Basic ROTC Program will include basic military training to motivate, train, organize and utilize students for national defense preparedness or civil-military operations. The bill provides, however, that no student below the age of 18 shall take direct part in hostilities. He filed a similar bill in the 18th Congress.

The program also includes civic training and preparedness during actual disaster response operations. This will enhance the capacity of the nation to produce the needed manpower and to expand its human resources in times of war, calamities and disasters, emergencies, and in support to the law enforcement strategy of the government against crimes by creating a pool of trained reservists.

A student who has completed the Basic ROTC program shall be registered in the Reserve Force upon reaching the legal age. Students who fail to undergo the mandatory Basic ROTC program will not be qualified for graduation. Exemptions, however, may be given to students who are certified psychologically and physically unfit by the Armed Forces of the Philippines Surgeon General, have undergone or are undergoing similar military training, and those who are chosen as varsity players in sports competitions.

Gatchalian’s proposal includes safeguards and ensures compliance with the Department of Education’s Child Protection Policy and laws like the Special Protection of Children in Situations of Armed Conflict Act (Republic Act No. 11188), the Anti-Hazing Act of 2018 (Republic Act No. 8049), and the Special Protection of Children Against Abuse, Exploitation and Discrimination Act (Republic Act No. 7610). Gatchalian’s proposed measure also seeks the establishment of Grievance Committees that shall receive complaints and conduct investigations on allegations of abuse, violence, or corruption.